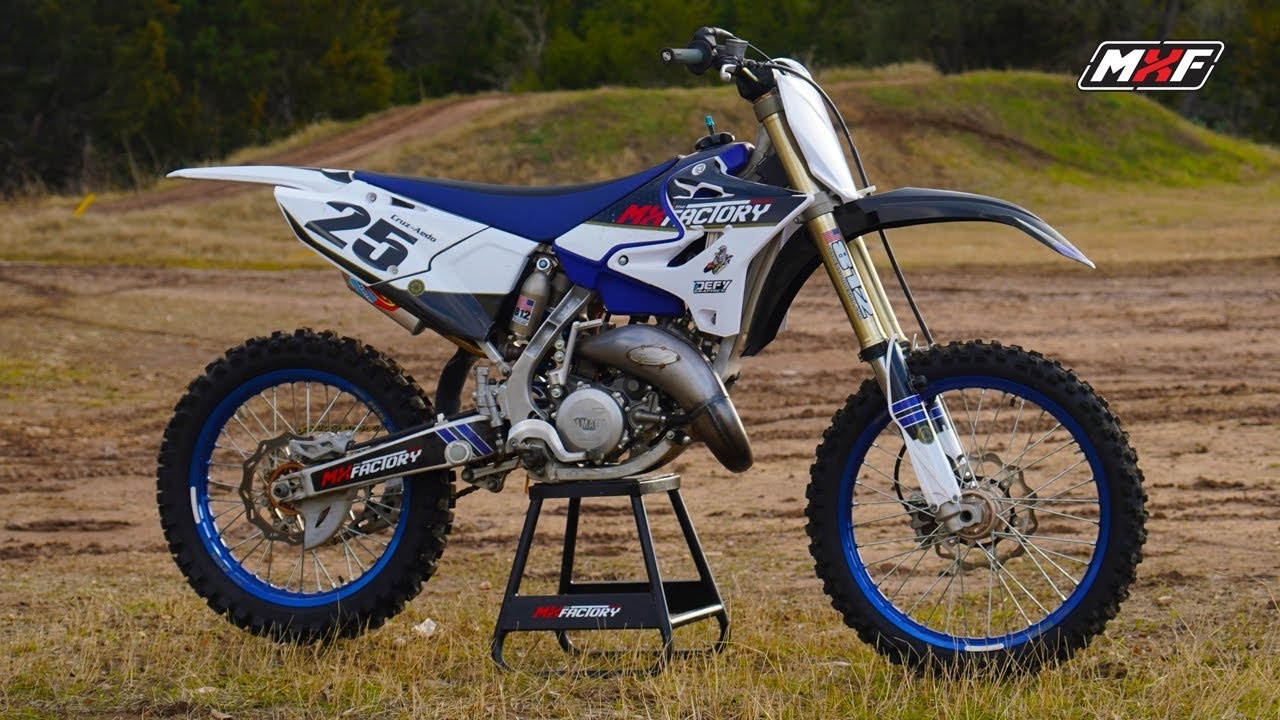 13 Things You Need to Know About 2-Stroke Dirt Bikes

What's going on, you guys, it's Cody with the MX factory today. I'm gonna tell you 13 things you need to know about two strokes.

I've been riding two strokes my whole life as the sport progresses and the sport grows, we're seeing less and less people on two strokes. So we thought it'd be a great idea to make a video about some key points on two strokes that some of you might be scratching your heads about. Maybe wondering about number one.

These things sound really cool when you show up to the track and you're ripping a two-stroke, you better believe you're gonna turn some hits. That's my favorite thing about these bikes. Number two, these things have what we call a power band, specifically, a purple power band. Just kidding. They don't have colored power bands.

What a power band is, is it's the curvature of the power. If you put this bike on a Dino and you look at the bike on a Dino, you're gonna see it's relatively flat in the beginning. And then it steepens up and it has an aggressive power curve. And that's one thing that makes these bikes just a little bit more difficult to ride is the fact that there's a narrow window of power that you kind of have to ride these bikes within.

Number three more clutch is required on these bikes. Just like I mentioned, with the power band, there is a flat spot with these bikes. So sometimes as you come out of the corner, the bike does wanna bog. So sometimes you'll need a clutch bump just to get those RPMs up versus a fourt stroke where the power is very linear.

And you're not gonna need as much clutch action. Number four, there's more room in the engine bay. If you look at a two-stroke, you're gonna see that there's a whole lot less engine in here and there's just more room. There's a couple things that make that nice. Number one, you can get your hands up in here.

If you need to get to a bolt or something like that, versus a fourt stroke where you might have to pull the tank. Number five. These things are easier to work on. Like I just mentioned before with number four, there's more room in the engine bay, right? The reason why there's more room in the engine bay is cuz there's less moving parts on these bikes.

Like me Nuro six. These things are cheaper to maintain. There's less moving parts. That means there's less stuff to wear out on top of that. These bikes do put out just a little bit less power. Then your modern Fort strokes. So that means stuff like chain and Sprockets are not gonna quite wear out as quickly cheaper to work on for a poor guy.

This is the bike right here. Number seven, these things are cheaper to buy. Like I mentioned earlier, these are simpler machines, right? There's less moving parts. That means they're cheaper. There's less to buy there. That's another thing that makes two strokes really awesome. Number eight, these things have less electronics than your modern force stroke.

That just means they're simpler. Right? Um, one thing to be mindful of on most two strokes is they're carbureated versus your modern force stroke. It's gonna be fuel injected. Don't forget to turn your gas on though. Number nine. These bikes are lighter. One thing that is nice about a lighter bike is the fact that when you get tired and you tip it over in a corner or something like that, it's a little bit easier to pick up.

It's a little bit easier to load in the back of your truck, unload in the back of your truck. And on top of that, if you do have a smooth, good riding style, sometimes a lighter bike's gonna require just a little bit less energy to ride as well. I'm such a weirdo. Number 10, these things are less planted to the track going along with the bike being light.

Unfortunately, sometimes that does mean it's less planted and it has a, a less stable fuel in the track. And it's more of a dance to ride the bike. Some riders can really appreciate this riders that have started out on fourt strokes and ridden, fourt strokes, their whole life. Really normally don't like this feeling number 11 more body English is required when riding these bikes going along with the steeper power curve, the more aggressive power band on these two strokes.

So there's just, it's a more of an active feel and it requires just a little bit more movement from the rider. Number 12, no engine breaking, or actually way less engine breaking than your modern forest stroke. Some rider can really appreciate this because on a really rough track, sometimes it allows you to stay a little bit lighter in the.

And the bike actually feels a little bit smoother, but it also feels really foreign to a four stroke rider hopping on one of these it's like rolling down a hill on your bicycle and just free coasting it, it just, you don't have much feedback from the engine. Um, so yeah, less engine breaking, number 13.

Everybody. We need more. Two strokes, please ride two strokes. I wanna thank everybody at home for watching the video. I know I'm not. Tyler tried my best, so make sure you tear me up in the comments. All right. If you wanna see more of our videos, look right over here. Check out our Instagram right down here and don't forget our Patreon.

I'm about to have a little baby. I need some baby clothes.