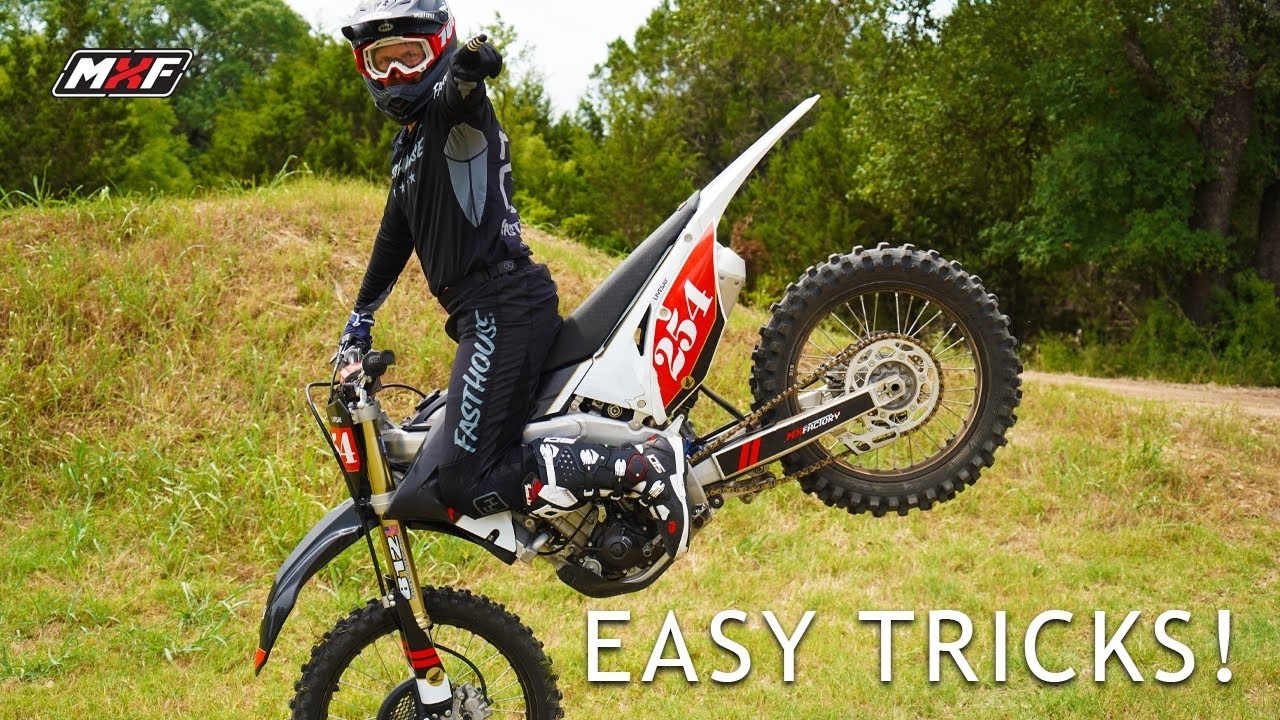 In this video, we're gonna show you the five easiest dirt bike tricks to learn.

So we get a ton of comments. And if you don't mind taking your time to comment in this video and let me know what you think about your dirt bike tricks. If there's easier ones, let us know, and we'll go over those two, but make sure you guys leave a comment, but we do get a lot of comments as like what's a cool trick to learn.

And so we're gonna just give you the five easiest ones that we could start with.

So we're gonna go over like two tips on each one of these. So the first thing we're talking about to one hander, The first tip I'm gonna give you is you must squeeze the bike with your legs. If you're gonna let go with your arms, you've gotta mixture that you're attached to the bike on one point of the bike, and that's gonna be with your legs, which is the strongest point.

So this should make this feel pretty easy. The second tip is gonna be don't hit a jump where you've gotta give it a lot of gap. Okay, that could throw your weight off as you're pulling the hand off the hand of bars, or if you pull too early, just start on a very, very small jump because if you land with one hand, chances are you're gonna be okay.

So start on something small that you can just kind of ease up to get the hand off, squeeze the legs, get it back off.

All right. The second thing we're gonna talk about given two tips on the no footer. There's not really any great tips here, except you don't want to jump off the pegs. Oh, oh, oh, you get food. So when you, what you wanna think about is you want the bike to kind of come up to you and your legs spread apart as it comes up to you.

If you get in the air and you spring off the pegs, guess what? You're springing, you're going. The bike's going away from you when you land chances are you're not gonna land on the foot pegs. Okay. You may miss the foot pegs, give it a lot of throttle and then you're taken off without being attached to the bike.

So my biggest tip here is gonna be making sure that the bike's coming towards you as you let the feet come off. Guys, if you see any value in the videos that we put out, the way you could help us out is just hitting the subscribe button down there. It's pretty. Just take your clicker or your finger and hit the button.

Thank you for supporting our channel. Okay. So the third one is gonna be doing a wheely. And the one we want to think about here is taking our time and understanding the steps. You have to go slow at first to get the front end, to pop up. You need good clutch control throughout control and brake control.

So the biggest tip that I can give you here without you going and watching her, how to wheelie video, which we'll put a link to is that you need to know how to use the rear brake to get the front end down. But at first. It should just be like trying to get the front wheel off the ground, like a foot, a foot or two at a time.

That's cool enough at first. And then you just work on that over time and next thing you know, you can ride it for miles.

Fourth thing we're gonna talk about is to stop being the tip that I can give you here is just making sure that you're sitting on the front of the bike. So what happens a lot of times when people are doing STOPP is they're just sitting in the normal part, part of the seat that they're comfortable with, they hit the front brakes and the front end wants to slide, cuz it doesn't have any weight on it to get traction.

And there's no there's too much weight on the back to actually get the back tire off the ground. So what we wanna think about is moving all the weight up to the front of the bike. When we hit the brake should make the back light and should make the tire grip.

So this is the fifth one doing a donut and to. That sounds a little lame, right? Like I can't even tell you the last time I did a donut, but what I can tell you is when I use the technique of knowing how to do a donut, get me outta trouble, say there's a rider down in front of you and you're in a race and you're, you got maybe three riders down in front of you and you need to spin the bike around real quick and get, go in the other direction or go around them.

Or you're on a jump and you need to get the bike to spin around and come down. It it's the same technique that we'll talk about when we're doing the donut and that's simply gonna be planting your foot into the ground, leaning the bike over. And then pop in the clutch. You get the back tire to start spinning and then hold steady throughout.

We keep it going all the way around. If you enjoyed this video, we do have plenty more videos over here. Don't forget to check out our Instagram at the MX factory, where you post awesome tips and tricks there all week long, like subscribe. And we have a Patriot account where you can make small, monthly donations, five, 10, $20 to help keep this channel moving forward.

We'll see you guys next time.