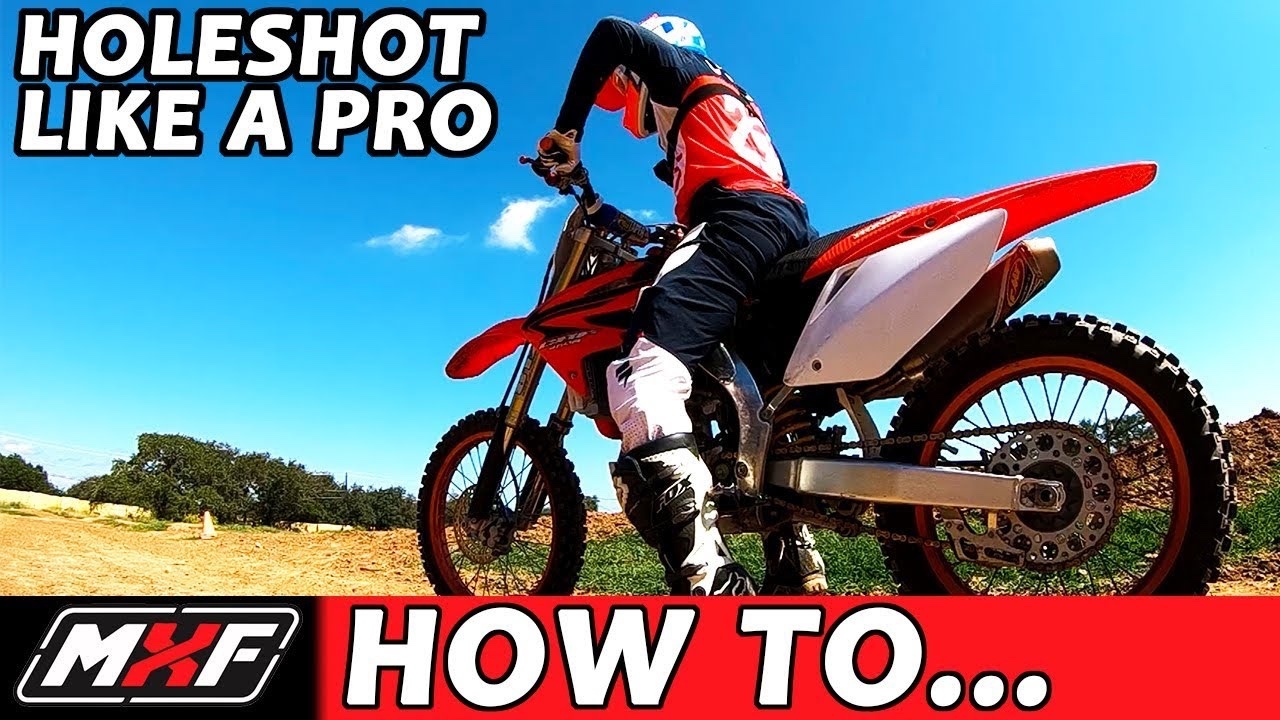 How to Holeshot a Dirt Bike - Best 3 Starting Techniques

In this video, we're gonna teach you how to get a holeshot in three easy steps.

What's up guys? My name's Tyler Livesay here at the MX factory today. We're gonna teach you guys how to blast your friends on the start.

Just kidding. What in this hell was that all? There you're gonna learn how to get a whole shot in three steps. Step one is gonna be your basic setup on the bike. Um, just understanding where to sit. Step two is getting the clutch ready to take off. And step three will be take off. Make sure you stick around to the end.

We got some bonus tips for you guys. Um, there's always differences in the dirt texture, um, concrete to Dirk, which is real important. For step one, we're gonna talk about your overall body position on the bike from toe to head. So starting at your feet really important, it's being extremely attached to the bike even after takeoff.

Okay. So what most people do is they start here and their legs go out. As soon as we take off.

oh God, it's funny. Every single time. so we're consciously gonna think about our legs are staying in between the shifter and the foot peg and in between the break and the foot peg, moving up to the hip area, depending on what the dirt's at, if it's hard pack or tacky, um, you're gonna move around a little bit, but your general area is about two fists to the gas tank.

And then moving up to the top part, I think about three fists to your upper body.

And then as you take off, you go down to one scale. Step two is a little more of an advanced technique, um, that you don't hear very often. What we're after here is getting the bike as close. To being engaged as possible. So what I mean by that is close to moving as possible. So what we're gonna do pull the clutch in click the bike up into second year is normally the gear you're after hold the front break in, and then you slowly let the bike or the clutch out until the bike starts to raise up and move a little bit.

You have your front brake pulled in the whole time, right? And as it starts to raise and move, you pull the clutch in just enough to make it not raised anymore. That lets you know, it's as close as possible to going, without having it all the way pulled in. Step three, um, is gonna be your take off. So basically what we're after here is creating momentum with our body, equaling the momentum of the bike.

Wow. You sure know a lot of stuff. It's great to learn. Cause nowledge is power. So when we're set up on the gate, we're here, we've got the bike loaded, meaning we've got the clutch pulled in throttle and then back, back down, what we just talked about. And then as the gate drops where neutral upper body we release and then chest goes into the handlebar.

Legs, stay in tight and we're moving with the bike. Not away from it.

For your bonus tip. Guys, I want you to think about when you're at a track, what is the dirt like behind the starting gate? Up to dirt, depending on what that is, is where you sit on the seat. Okay. So if you've got good tacky dirt, you know that the back wheel's gonna bite and go, you need to be on the front and ready for that, right?

Get a little more traction on the back tire. And then with sand even a little further back, um, still the same movement, upper body. And then we'll make another video for concrete star since that's its own animal as well. But that's your tip, your bonus tip for this video. All right, guys, I hope you enjoyed that.

I hope that gets you a little closer to the front of the pack on the start. Leave some feedback, check out these videos for some more stuff. Subscribe down here. Let us know how you did on your next start.