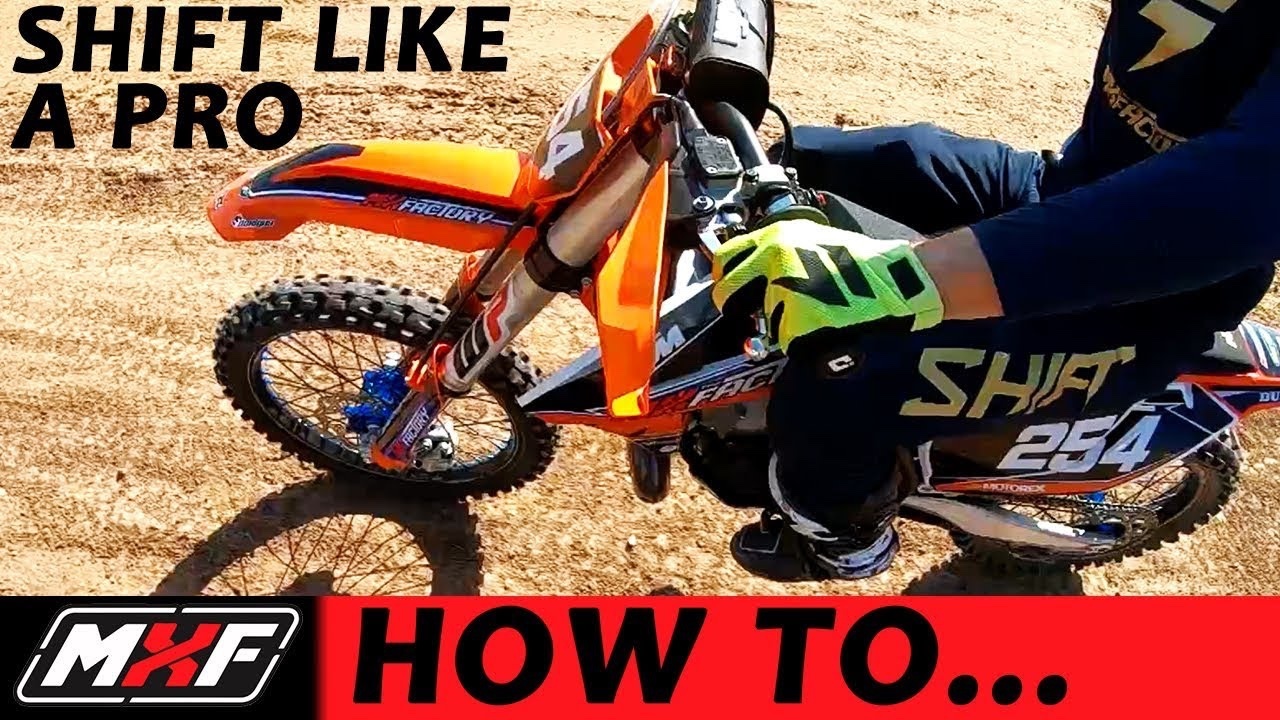 How to Shift a Dirt Bike Properly - Top 3 Tips Plus Bonus Pro Tip!

In this video, you guys are gonna learn three tips to properly shift your motorcycles, dirt, bikes, or motorcycles, I guess it could be either, but just shift them better.

I gotta get psyched up, man.

What's up guys, Tyler Livesay here at the MX factory today, we're gonna teach you guys three awesome tips on how to shift your dirt bike better. The first tip is gonna be clutch or no clutch. When do we use this thing? And do we, the second Tip's gonna be foot position. Are we putting our feet in?

Are we putting our feet out? We'll figure it out. The third, one's gonna be timing. When do you do this? Stick around to the end. We got a pro tip for you guys. Something a little special. That'll help you gain some speeding down the straightaways and also slow down for your turns. It's gonna be good. Can you guys just, uh, you know, I can subscribe this.

You do not want to use your clutch when you're shifting down. The reason for that, as you can see in a breaking video that we also have is that the engine is also slowing you down. If you pull the clutch in it, frees the engine up and you almost gain speed and lose traction with your wheels. So as a thumb, what is it?

Oh, you want to think about when I'm shifting, I've gotta free up my transmission. Somehow. I need to pull the clutch in to do that. Shift the bike up, continue to go. Okay. You can also let off the gas to free that up, but I feel like that's, you're just kind of slowing down, shifting then speeding back up rather than just pull the clutch in release shift as you do it, it's gonna get easier to.

Faster. So don't be afraid to take a lot of time learning this and not don't get frustrated with yourself if it doesn't happen right away. In fact, what we teach our, our learned to ride riders who are just fresh off the bike is in steps off the gas, pull the clutch in shift, let the clutch back out, back on the gas.

So that is the steps of that. You just get better and faster with it as time goes on. And the more you practice a lot of times, you'll see a pro level rider, not using his clutch when he needs all the speed that he can get. And that's their only option is to gain speed. And they're trying to get. Every little 10th that they need nine times outta 10, it home to start they're way off the back of the bike.

And they're just banging through the gears and not letting off it's off the throtle. Now their bikes have upgraded transmission. They can take more abuse than most bikes. So keep that in mind you, uh, definitely wanna take care of your bike. So. The clutch is a little better. So to go into a little more depth on what the bike's doing, when you let off the gas and, or pull in the clutch, you think of it as all these blinds working together inside your engine.

And if they're spinning faster, it's harder for your shift catch in between one of those and keep on spinning. So what happens when you let off the gas and pull the clutch in, it slows that process down. So your shift is easier to catch, right? So a lot of times you'll see. Hold the gas on and miss their shift and, or hit a false neutral because it's not getting caught in between the right spines.

Back shift back and not shift and then out and then back under and shift and then out couple different reasons why the main one is that it eliminates any risk that you catch your foot on a rut or the side of a jump phase, depending on what you're doing. It just is a little safer and more stable, and then gives you a little better opportunity to squeeze the bike up here.

Tobra 50. Wanna hear the most annoying sound in the world, guys, guys.

So you hear you made it to the end. Congratulations. And thank you. See, here's your pro tip. So what you'll notice if you watch a lot of videos of advanced riders is they do a lot of their shifting either in the. Or in the air, you do not need to use the clutch to shift the bike up or down the air. The engine should be freed up enough to, for it to go.

No problem. Just make sure you're off the gas when you're doing it. So they're gonna shift up in the air to go down the longer straightaway. It's freeing up the engine because there's no tension on the rear wheel. Okay. As long as you're not revving that bike in the air, you don't wanna do that at the same time, but off the gas shift up in the air.

It eliminates one step when you get to the ground and then also shifting down in the air to eliminate a step, going into a turn, also creates some breaking as soon as you land in and plants the rear wheel a little more. So those are your pro tips. Try this in the air, jump a jump shift up land, smooth throttle out.

Also find a jump that's a little closer to a turn shift down in the air. Create some desal before you get to, uh, to get to the turn. All right. Fellers and ladies, that was it. We shifted our bikes up, down all around. Watch more videos over here. If you like that one Instagram's down here. Three awesome clips every week.

Please come see us there and you can subscribe down here. Peace.