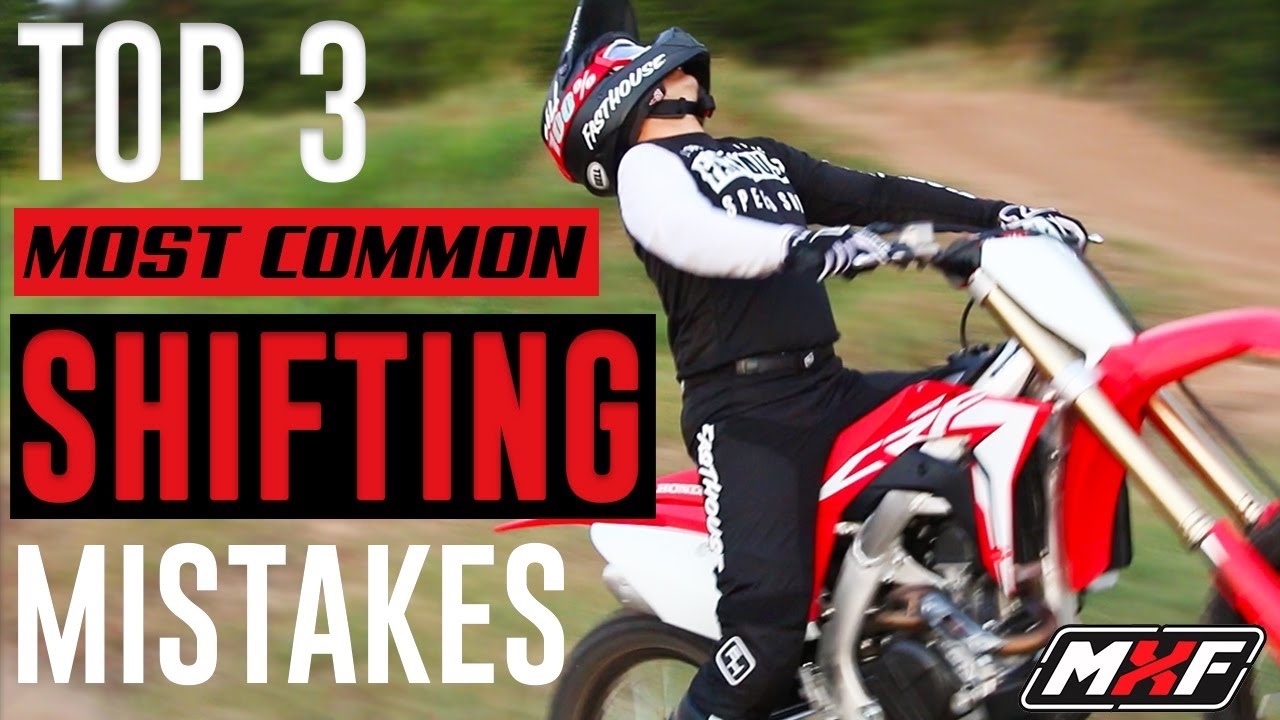 Top 3 Most Common Shifting Mistakes on a Dirt Bike - Plus Bonus Tip!!

In this video, we're gonna show you the top three, most common shifting mistakes.

What's up everyone. This is Tyler with The MX Factory. Today, We're gonna show you the three most common shifting mistakes. Big question for you guys. We've got our 1 25 giveaway that we're getting built up. We wanna know what you want to see first. Do you want a new pipe on there or do you do want a new wheel?

Leave it in the comments below what you guys would like to see first, don't forget to hit the like button hit subscribing also the little bell beside the subscribe button, click it. Make sure you stick around. We got a cool bonus tip at the end. It's gonna definitely help you with your shifting

first mistake. Shifting at the wrong RPM. This is crucial to making your bike handle the way it's supposed to. If you're geared too high and lugging the.

If the power won't ramp up, it's usually that you're too low on the RPM. The bike, obviously doesn't have the power to pull you out of sometimes bad situations or just get you enough speed to get over the jump that you want to jump. If you're letting the bike rev out too hard,

if the power drops off, it's usually you're too high up in the RPMs. The bike doesn't handle the suspension doesn't flow. As smoothly as it would, if you're just in the meat of the power, you can kind of typically figure out where these RPMs lie by. Is it by getting super loud? And is it vibrating super hard it's time that you've, you've already missed your time to shift if it's gotten there or is it by making like a low grunting, like Ryan OSUs noise, like, uh, does that, what, all right.

but anyways, if your bikes are making weird noises and things that don't seem common when you're listening to other riders that you can tell that are experienced, like, I always say, find a knife, safe, a knife. Don't find a knife, find a nice safe spot and practice getting in the right knee.

Mistake. Number two, shifting, too close, or on a jump face. There's multiple reasons. This is. That, especially if you don't have a ton of experience or really, truly trust your transmission in your bike, bikes are known to catch what we call a false neutral. If you're at the bottom of a face of a jump and you shift right the last second and your bike, doesn't go all the way through to the next gear.

And it catches that false neutral nine times outta 10, it's gonna result in a crash or something really close to it. If false neutral is a new phrase to you, it's just basically going from one gear to the next, but not making it all the. If you go from second to third gear, it's kinda like catching two and a half and two and a half doesn't work.

So you just gotta think about if the gear isn't clicking in. That's what we call false neutral, I think neutral. And sometimes that happens away from the actual neutral position of the engine, right? It could happen in between third or fourth or fourth or fifth gear. It still is a possibility it could happen there.

What you wanna do to kind of eliminate the risk of getting into the wrong gear or hitting the. For that jump is you want to take that turn in the gear that you wanna hit the jump in, go into the corner. Maybe that's third gear. It may be a second year corner, but you have to learn how to ride that corner with a little more momentum where you can pull third gear coming out of the turn to get over the jump.

Right? You don't want to slow up on the turn to go down to second gear and then have to shift right away. And then you gotta jump. There's just too much risk too much going on, especially for a newer. You will see guys in Supercross shifting, coming outta the berms, but these guys are the best in the world.

So you definitely wanna practice carrying good momentum and carrying the gear that you want to hit the jump in in the corner.

Mistake. Number three is gonna be improper shift lever, position too high or too low. If it's too high. You're gonna have a really hard time getting to that shift lever when you're sitting down. So you're coming out of a turn. You need to catch a couple gears before you stand up and approach a jump or whatever it is.

It's gonna be really difficult for you to get your foot all the way up to that. You're gonna find what's gonna happen is your foot is gonna come all the way off the foot peg, and you're gonna be lifting your whole foot up instead of kind of hinging at your ankle and using your heel to leverage up. If you're standing and your shift, Lever's too low, then you're gonna have a really, really hard time getting your toe down under.

To pull the shift lever up and it also kind of leaves you to being vulnerable, to catching your foot on the ground with your toe pointed way under which I have done that before. And it doesn't feel good wrapping your foot underneath the foot peg. What I like to do, what makes me feel good is I like to go just above level with the foot peg.

Right. So that gives me a little room to get under there when I'm standing. And also it's down low enough when I'm sitting that I can get it without having to lift my whole foot up off the foot peg to get the gear to come up.

So our bonus tent, we teach this every single day here at MX factory. It's like the first thing that we teach and it's how to modulate your feet back and forth. So nine times outta 10, when we. A new rider come in or a beginner rider, or even sometimes experience better. They'll come in and they'll ride with their feet tucked out like this.

That way you have safety, your foot's tight into the bike. Your feet are pointed in the direction that you're going and everything's working the way it should. We hope your shifting is gonna improve from watching this video. We really appreciate you guys keeping along with our series and our channel. If you like to see more video.

Through over here, you can catch all our social media, Patreon, Instagram, and all that good stuff down here. When in doubt, throttle out, link in the description below. End up there, up there too. That's not, it's actually up there. It's.