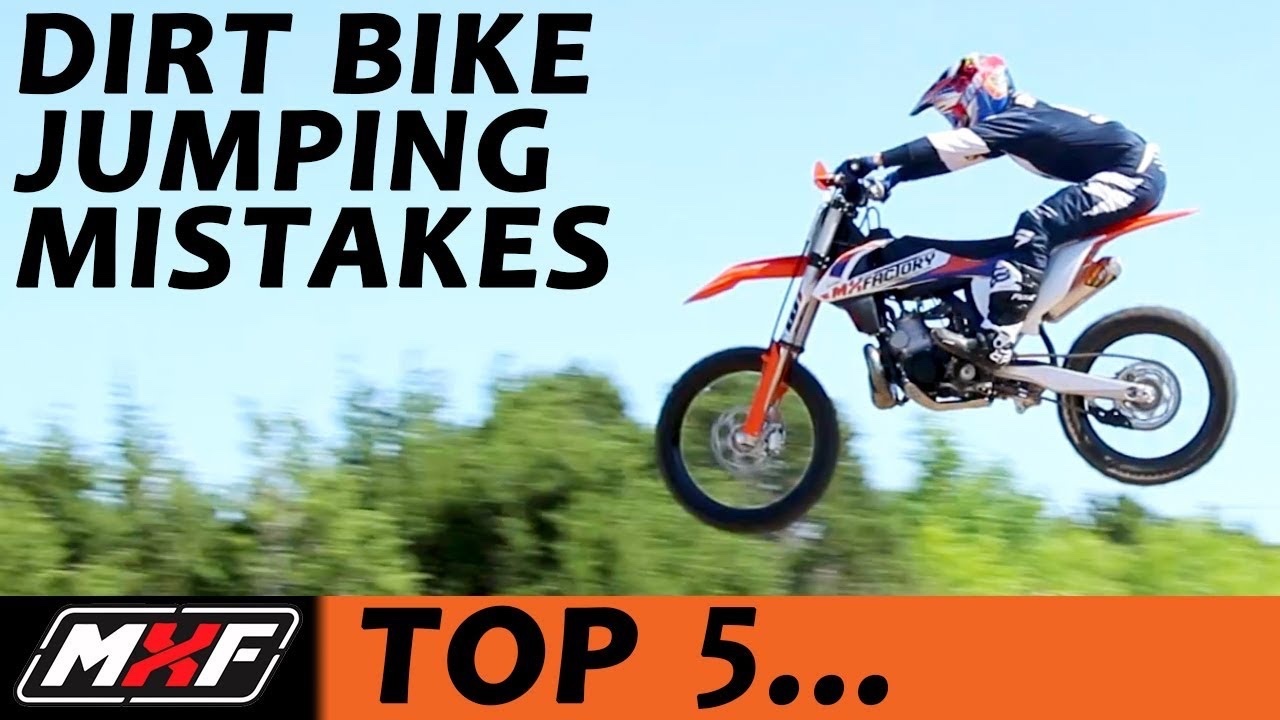 In this video, we're gonna teach you the top five, most common jumping mistakes.

What's up guys, Tyler Livesay here at The MX Factory. Our home. We're super excited today because we get to talk about the fun stuff. Jumping. You guys have been asking for it. We wanna give it to you, but we wanna give it to you safely. So we're gonna talk about the. Common mistakes that we see on the daily out here, and hopefully help you improve.

We do have a more informative video of how to jump video in our description down below. Make sure you click on that, this stuff isn't making sense to you.

Number one is improper throttle deliveries. What we see a lot of the times is riders will chop the throttle right at the top of the jump.

Or get a lot of throttle right at the top of the jump.

What you're looking for is this. Smooth delivery from the base of the jump all the way through the top to make sure the bike tracks straight and stays in line

note. I am on a 2 52 stroke today. So there are some subtle differences, but most 90, 95% of this is all the same on both bikes. This is gonna hit the power a little quicker. So if you're on a two show got there, you've gotta be really ready for that. As far as being in your body position and also very steady with your throttle.

The four show power curve is a little more linear and a little smoother. This hits a little harder. That would be the difference in what we're doing. Number two, improper balance position is a big, big, big thing that can really mess you up. You see a lot of guys hit the gas. Was they way too far back.

And then as they start to go up the face of the jump, it inclines them even more and pulls them off the back. Then they end up looping it out.

And, or they hit the jump way too far on the front. Mm-hmm, let off the gas. All the weight moves forward. The jump may have a kicker or whatever it is, and then it endos them forward. The solution to that is squeezing the bike type clamping on from your hips down and then moving with the power. So as you turn the power, your body matches your wrist.

And as you're going up the face, that's so important because like I said before, the incline is working against you. You must lean your body into that to be safe. Number three is gonna be sitting and or standing at the wrong time. Meaning when you're coming up to the jump, like getting right before it, you decide to stand up right the last second and your body.

Hasn't had time to clamp under the bike and get prepared. There's a lot of times where the imbalance starts to take place there.

Also sitting on steep jumps that are high speed and, or just any jump that has a real steep, short face is gonna buck you over the bars if you're not careful. So just making sure that you read the face and apply the right technique to it.

Mistake number four is gonna be improper landing. And that's the part we want to work the best. Right? We wanna keep it on two wheels, keep going straight. So what I really encourage when you're coming up to the landing of the jumps, two things being really attached with the bike, taking the hit, not only with your suspension, but with your legs.

So when you squeeze the bike, you take the first part with your legs. Let's the suspension take the rest. Second thing is making sure that if you're able to, if it's not a corner ride after it, that you land on the gas, if you're a little bit sideways on the landing and you're landing on the gas, chances are that little jolt of tire spin is gonna straighten the bike out rather than let this.

Mistake. Number five, not knowing your face. What I encourage you to do is take your right hand, start to feel it just rub it. Dust the eyeballs. That's it. I put that at the end. You can't be serious, man. You cannot be serious. Big key thing here is that you're looking ahead. You're seeing this and visually able to process what you're supposed to do on the motorcycle before you get there.

A lot of times we see riders looking down at their fender right in front. They get to the jump face. They're in a wrong Rud or something. That's a big kicker in it and they don't have enough time to react. So I encourage you to make sure that your vision is up far enough to where you can make the right decision going into that jump base.

And that just takes some time that takes a little bit of studying and it takes a little bit of trying, but your technique is the base level. You've gotta have that and then you'll be able to do all of it. All right guys, hope you enjoyed the video. Hope you're jumping straight or longer, faster, smoother, all that good stuff.