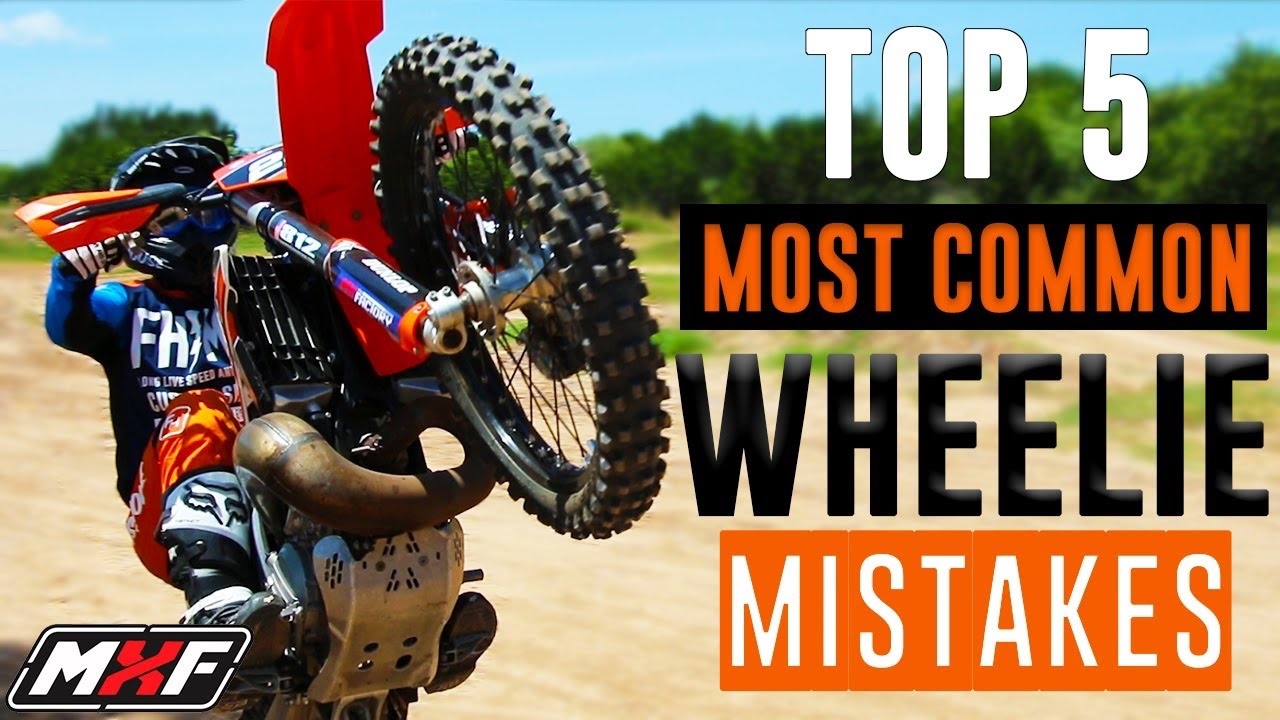 In this video, we're gonna show you the top five, most common wheely mistakes.

What's up guys, Tyler Livesay here at The MX factory in MX factory land. Today, we're gonna show you top five reasons that you're having trouble. Wheeling your motorcycle. You do love the videos, please. Don't forget to like 'em subscribe and hit that bell notification. What that does is every time we put a video out or any content, it comes straight to your phone.

You're the first to see it. Thank you patrons for supporting our channel. It's growing. We're super excited about that. And don't forget, we're giving a motorcycle away. We're gonna put a little thing up here in the corner for you to click on, to get all the details. If you wanna win, it's there for the taking, I guess, is that, that what you said, these are just some mistakes.

If you need to know how to Willy, we have a really awesome video. Here, click on that. And it's gonna get you right up on your back wheel. All that's a fourt stroke though. What about for two Strokers Matt? What about for electric bike

first and most common mistake that we see when we're teaching people, the wheely is your feet. Come off, you take your feet off as you get the front wheel up and is a natural instinct. Likely from when you learn how to wheelie on a bicycle to get off that thing, if you feel like it's gonna flip back in order to prevent from your feet coming off, you're just gonna have to start a little slower, meaning not get your front wheel up so high, where it spooks you and you're ready to bail off the bike.

Just start getting your front wheel off a foot two foot, or you can keep your feet on the pegs and planted and control that rear brake, which is the most important thing.

It's pretty obvious. It's to use your rear brake but the thing is, is you've gotta start small. Okay. So that means get the front wheel up and practice slamming the front end down by tapping the back break before it gets too high, because what happens is you get too anxious and you forget to make very important moves on the bike to control it.

And you miss the rear break. So start small to where you can control it, make it a habit. And then get it up to the bounce point and start controlling your wheelie with the rear brake and the thro.

The third mistake is gonna be sitting too far forward for two reasons. That's bad. One. You won't get any traction to the back tire to get the front wheel coming up so that I think we see that in the comments a lot is people saying I can't get this bike to get the front end up and all bikes with the clutch in just a smidge of power.

And that puts you back to almost the crease of the back seat and the fender where that meets for a guy like me. That's not very tall. That's gonna put me there for a taller guy. May even get them a little further back, closer to the back fender.

The fourth mistake is gonna be improper clutch control, and that's gonna be in two areas when you get the bike up, when you pop the front end up

and when you have it up there,

the big piece is when you're getting it up, you have to have enough RPMs and a quick enough. To get the front end up and that's gonna be different on every bike. And also the terrain is gonna determine a lot of that, but once you get it up high and you're controlling the back break and the throttle, the clutch is in play with that too.

Mistake number five, being in the wrong gear, RPMs have to match the proper clutch release. And if you're too high of a gear that just isn't gonna work.

If you're too low of a gear going too fast. That also won't work.

If you're in first gear and you're going too fast and you pop the clutch, you just won't have the torque available to get the front end up. You may have to shift up a gear, but know that this is really geared towards more slow wheelies. What we're talking about here. So. First gear is really the magic gear.

We've had a lot of people say that they have a lot of rear will spin and not front end pop. And so that's gonna go along with a couple of these mistakes together. So one is gonna. You may be sitting too far forward on the bike. You may be in the wrong terrain, maybe that slippery grass, or you may just not be popping the clutch as much as you need to and leaning your weight back into the right part of the bike to get it up.

If you go through these steps and you're eliminating the problems, likely all of a sudden the bike. Just gonna come up and you be like, oh, okay, well that, that's what I was looking for. So make sure that you're spending enough time analyzing the steps and then eliminating 'em from the mistakes you could be making.

We hope you're mistake free with your wheely game. If you're not watch the video again, there's more videos over this way. You can subscribe to Instagram Patreon down here. Don't forget about the bike. Give away who doesn't want a free bike. Fourth mistake is gonna be wheeling with your pets on your motorcycle.

she's like, oh man, I ride this thing. All the.